One of kayaking’s greatest joys is the ability to get close to wildlife by silently gliding in the water. One of nature’s beauties is the trumpeter swan. As the bird attempts to get airborne three things happen simultaneously; water sprays up from their rapidly churning webbed feet, their enormous outstretched wings ‘thump whump’ as it applies lift and its’ long neck snakes forward to add balance. The effect is stunning! The following is an excerpt from an online article describing a swan attack that ends in the death of a kayaker:

“Anthony Hemsley, 37, drowned after a swan he was checking as part of his job at a condominium complex, charged at him. Authorities believe Hemsley, who was devoted to caring for swans, got too close to the large bird or its’ nesting area before he was attacked. While checking on the swan, he fell into the water when his kayak flipped.

He had on heavy clothing and tried moving his kayak toward shore while being attacked by the bird. He managed to get his head up a few times but ultimately failed to resurface. Sadly, emergency crews were unable to revive him.”

Swan attacks are not uncommon, though they nearly always make false charges to scare us away. Make sure you are extremely cautious and give them as wide a berth as possible– group travel is a good idea. In our area there are a pair of swans who inhabit the east side of Fifteen Mile Creek where it narrows and turns north toward Lake Ontario. Safety Tips: be sure your paddle is attached by a leash; wear a life jacket; know attack signs such as – wings folded in and back, neck up curving back then forward, swan silently speeds up, running on water, neck straight out, then sudden application of brakes as swan skids on the surface folding its wings in a tucked position then slides by (hopefully) and finally keep your head down, lean forward ready to use your paddle if need be for protection.

Sometimes in life we push ourselves. As an expedition level[...]

Observations of a Southern Kayaker in the Northern Latitudes

The physical and emotional transition from living and sea-kayaking in[...] 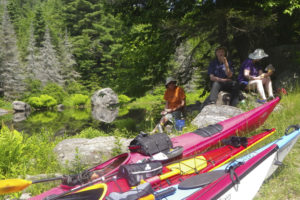 The trip leader will determine the minimum paddling skill and/or[...]

Please be advised that as of Spring 2017 all paddlers are required to wear a life jacket.

We're currently offline. Send us an email and we'll get back to you, asap.

Are you ready for your next great adventure? Join Us